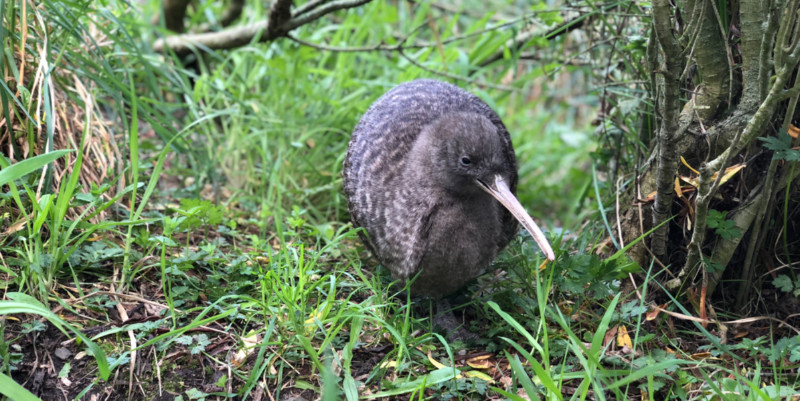 Our breeding programme is run with the ongoing and invaluable support of Willowbank Wildlife Reserve.

Kiwi in New Zealand are undergoing a serious decline in numbers, mostly due to the effects of predators. Currently in the wild, 88% of kiwi chicks hatched in the North Island are killed within one hundred days of hatching. The most destructive predator of kiwi are stoats. It is estimated that they alone account for the deaths of 40% of the 88% mentioned above.

Journey to the breeding centre

It is estimated that the mortality rates are up to 95% for South Island species. These are alarming statistics for the continued survival of the bird which is our national icon. With the help of modern technology and a specially trained ‘kiwi’ dog, breeding pairs of kiwi are located in the wild.  The male is left to sit on the egg for about 30 days. During this period the male looks after the processes of turning the egg and allowing for cooling periods when he is off the egg to feed. After 30 days, the egg is lifted from the burrow and brought to the Trust facility in Christchurch. The egg is cleaned, removing any potentially harmful bacteria, and is placed in a carefully prepared incubator.

At this stage the egg is monitored as are temperature and humidity levels in the incubator. The egg is weighed and this detail, along with the condition of the egg and the date it was lifted from the nest, is recorded. The egg is weighed twice a week and these weights are also recorded. This process allows for tracking of the weight loss which is expected during the incubation of an egg. An egg is expected to lose between 12 – 16% of its weight during the incubation time.

Candling involves shining a special cool light torch on the egg. This is done by moving the torch from one end to the other, along both sides and then across the egg. This allows keepers to check on the growing chick inside the egg. During candling, which is done sparingly due to the light, the keeper is checking air-cell enlargement, embryo development and the clarity and condition of the inner membrane and network of veins, all of which are good indicators of the health of the embryo. The regular turning of the egg in the incubator mimics the actions of the male in the wild. The egg is only turned in intervals of 45 degrees each time and follows a set pattern of turns.

After a period of time in the incubator the chick hatches; total incubation period is approximately 80 days. The first stage of hatching for the kiwi chick is known as the ‘internal pip’ and involves the chick breaking through the membrane between itself and the air-cell at the top of the egg. The next stage is the ‘external pip’ and this process can take 3 to 4 days. Often noises from the chick inside the egg can be heard during this time. The ‘external pip’ involves the chick cracking the shell with its beak and enlarging this hole, also with the beak. The feet are used to help kick the shell free from its body towards the end of hatching. The process of ‘external pipping’ can be a slow and delicate procedure.

Intervention is occasionally necessary once the chick begins to hatch. This is generally if the chick is mal-positioned or chick movement begins to drop. Any intervention at this stage is very carefully and gently undertaken by experienced staff, as this is a critical stage for the baby chick.

After hatching the new chick is weighed and this information recorded. The new kiwi will also have its umbilical cord disinfected. The next step for the kiwi chick is to be placed into a special unit known as the TLC (thermal life support cabinet).

This is where the chick will spend the next two/three days under close supervision and care from keepers. The TLC unit helps the chick to dry out and provides a closely monitored and balanced environment. During this time the chick is sustained by the yolk sac which is contained within the bird. This yolk sac nourishes the chick for up to ten days. It is normal for the bird to lose weight during the first two weeks where after it can potentially take a further two weeks to reach its hatching weight.

After three days the chick is big enough to be moved into a brooder pen. This pen has a deep floor covering of peat, a burrow and the other necessities such as water, and small stones for the birds gizzard. In this brooder pen the chick will start to receive a specially formulated diet which is weighed, allowing us to track how much food the kiwi is eating. The bird is weighed daily for two months until it has reached hatch weight.

The chick is then placed in a special area known as a pre-release pen. These larger pens have a burrow for the bird as well as an area to allow for natural feeding habits such as probing to take place. During this time the amount of food the kiwi eats is recorded daily and the bird’s weight is checked twice a week. These pre-release pens are a ‘hardening off’ area before released into predator free creche sites.

Once the chick has reached an appropriate weight of 450 grams, it is taken to either a predator-free island or inland creche site. However, there is often a situation which requires the kiwi chick to remain for a longer period.

Once the chicks are released into predator-free creche sites/ islands they will be monitored to ensure they are putting on sufficient weight. Should their weight drop, then supplement food is supplied until the chick adjusts to looking for food by itself.

The chicks will remain in these protected creche sites until they reach 1.2 kgs. At this weight they can protect themselves from a number of predators. These young birds will then be removed from the predator free creche sites and released back into the wild, mostly within the region that the eggs were retrieved from. The kiwi will continue to be monitored in the hope that one day they too will be adding to the kiwi population.

A great way to help protect kiwi and other native species is to become involved in trapping programmes. Find out more about the New Zealand Conservation Trust’s predator control programmes.

In 2004 Mohua was captured to be translocated to another region. During this process the tip of her bill was accidently broken with her left nostril being removed and only a portion of her right nostril remaining.

Mohua had to be assist-fed as it was too painful for her to probe in the soil and feed herself. After a few months recovering she was trialled in a controlled wild setting, but she was not able to maintain her body weight. She was sent to Mt Bruce National Wildlife Centre for continued rehabilition. After another failed attempt to put Mohua back into a controlled wild setting she was sent to Massey University.

In 2005 Mohua was brought to the Trust’s breeding facility to continue with her rehabilitation. Not long after she arrived an exciting development happened. Her top mandible started growing a protective case for her nostril. This was wonderful news as staff were still having to assist-feed her. Perhaps Mohua would begin to feed herself.

Staff were extremely hopeful watching Mohua begin to slowly feed herself, consuming 10 grams of mince on her own for the first time.
In 2006, over two years since the injury occurred, Mohua hit a milestone that no one ever thought would happen. She showed the first true signs of probing in the soil and maintaining her weight. In addition to this exciting news, a mate was found for Mohua. Saxon arrived from the Otorohanga kiwi House in the hope that they might breed. Unfortunately this did not eventuate.

Mohua’s appetite for worms increased to such a degree that she was consuming 500 earthworms a day! This meant every staff member was constantly digging up patches of soil looking for worms to feed her. Articles were placed in newspapers requesting help from the public. This continued for some time until we were able to convince her that the diet fed to the other kiwi on site was just as tasty as earthworms.

Mohua did encounter a few more setbacks but, we can definitely say that Mohua, the fiesty Great Spotted Kiwi, is now able to feed herself.
Due to the nature of the injury sustained, constant trimming and filing of her bill needs to be done to ensure the casing doesn’t close over the nostrils.

As of February 2020, over 509 kiwi chicks have been cared for at the facility